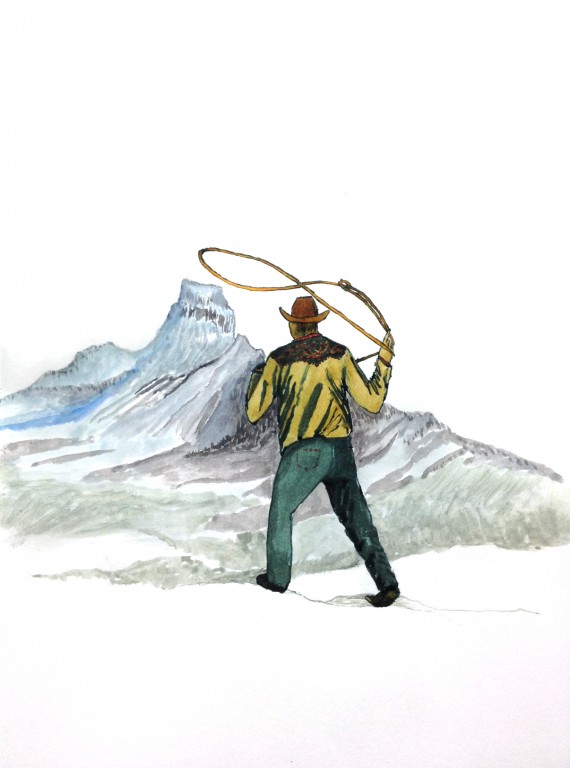 Skagaströnd, Iceland–Johnny Cash’s low rumble fills the cozy, lacquered log cabin interior. The charred aroma of meat on the grill filters through the air and carved wooden Native American figureheads flanked by cowboy hats bedeck the walls. An elderly white haired man dressed all in black shuffles out of the kitchen, slowly up the staircase. It takes a beat to remember I’m not in some dusty American roadhouse. Or on the set of a David Lynch film for that matter- though not far off.

Instead, swirling winds howl like harpies. Snow drifts pile relentlessly outside the protective walls of Kantry Baer, the only bar / restaurant in Skagaströnd, a tiny fishing village in the North of Iceland. Local legend, Hallbjorn Hjartarson, has just made his way up to the DJ booth for his regular Saturday night set on the all country, all the time radio station he’s pioneered on the second floor of his beloved bar, the heart of Skagaströnd.

“They have always say, this guy, Halbjorn is crazy,” says Hjartarson of the town’s residents, over tea in his little red house, perched at the edge of the North Atlantic.

“All the time, from when I was little boy.”

Crazy or not, perhaps possessed is a better descriptive, Skagaströnd has him to thank for putting the rural outpost on the map. At least as far as notoriety goes. Although it very nearly didn’t happen this way; delivered many decades ago, in the neighboring village of Blönduós, Hjartarson came into this cold world as a stillborn.

“I was dead.” He says with his heavy Icelandic accent, as two small sharks circle some goldfish casually in the hulking tank nearby.

“They go with me out to the hospital, and they set with me on the table, and after few minutes, 5 minutes, 6, 7 ,8 – all the women go to this little shelf, to look, because they say this is so beautiful a guy. Little guy, he is so beautiful. So they look. One of the girls, saw this finger [saw his little finger move]. So they take me back, and go inside again, with me and put me in cold water. And, I lie in this cold water, [until I] started to breath.”

Inauspicious beginnings for a local boy who’d go on to release a dozen country albums, and tour Iceland numerous times, be recognized by the CMA’s in Iceland and be touted as the Country King by his homeland. Ask most any Icelander about Skagaströnd, and they’ll tell you about Halbjorn the Icelandic Cowboy, tell you about the Kantry Baer. Most say it’s the only reason to make the trip. In fact, when the bar burned to the ground at one point, the whole country pitched in so that he could rebuild it, sending checks from all over.

But how did a kid from rural Iceland come to carry such a torch for these far away songs and culture of which they told? From the moment he was exposed to country music, through records of his older brothers, he fell in love.  Asked what it is about the music that really strikes him, it appears ineffable.

From the age of seven he would listen to these records over and over. Watching his brother like a hawk while he played chords on the guitar, he’d memorize his finger placements. Would steal it to play while it’s rightful owner was at work.

He formed a dancing band with his brothers in his teens until finally, he had his break.

A man from Reykjavik was looking for new recording artists, so he made a cassette and sent it in. Hopeful. The man liked what he heard, and soon Halbjorn was making his first record, recording twelve country songs to be distributed throughout Iceland. As these things can often go however, the record didn’t sell to the man’s satisfaction, and so the driven Hjartarson was left to his own devices.

“I was thinking every day I was thinking, every night I think, I think I think, what I can do to do more,” he recalls emphatically. “So I [decided] to give out my records myself.”

He opened the Kantry Baer, and ran his own HJH Records out of it. Releasing album after album, pursuing his dream, building up a level of notoriety country-wide. The call of the country homeland was strong, and to make his sixth album, he made the pilgrimage to the mecca of twang – Nashville, Tennessee. Though the trip lasted a mere few days—enough to score a lifetime’s supply of flashy cowboy duds and hop over to Graceland (this, he did not seem impressed by)—it was the one and only time he’d set foot anywhere in the place that had inspired his life’s work.

This imported sound, which he’s made his own- can feel otherworldly when you listen in this environment. When slide guitar washes out over a backdrop of black waves and barren, snowy hills, there is something that feels oddly congruent. A white, wild west.

When asked where his music comes from, where the aesthetic—this fully realized version of a place he’s only been for fleeting moments—comes from, he answers matter-of-factually.

“Because I was, in Nashville, in my other life.”

I ask what he means by that, and he indicates skyward.

He goes on to tell me that he’d had the feeling someone had been speaking through him, for most of his life, bringing him these songs. A psychic came to his home at one point, and affirmed this, saying that he saw he was with him still. Hjartarson said he could see Johnny Wild above him on the ceiling.

I say that it makes sense. And it does, really.

Regardless of the source, one man’s obsession and devotion to his home, has left its indelible mark. The town’s children come to the Kantry Baer every day for their school lunch. Each Friday, it’s a beacon in the night as the only place to imbibe in a place that sells no alcohol.  Some Saturday’s you can even see a live country band from Reykjavik or some surrounding area, a spark of life imported to the North. They may call him crazy. But the heart of this town in undeniable.